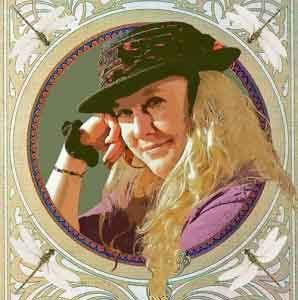 Michelle Sellgren is originally from Germany, where she lived until age 13. Even as a child, Michelle showed talent in her drawings and took to it quite naturally. Growing up, she had a few art classes but not much in the way of formal training.

When she went to college at the University of Florida (UF), she majored in psychology with a minor in sociology. At UF, she often joined her art major best friend at figure drawing sessions and longed for a career in art but didn’t believe it could financially support her. Later, Michelle went to Santa Fe Community College to pursue a degree in Graphic Design Technology, which she felt was a good compromise between business and art.

Michelle has worked on many interesting projects through the years, designing everything from magazines to billboards and websites to emails. She also had some cool jobs like working at a Fox television station, a national magazine and a direct mail magazine. Now, after 20+ as a professional graphic designer, working mostly as an independent contractor, Michelle is focusing more of her energy on developing her artistic abilities and also selling real estate.

Michelle’s favorite mediums are acrylic paint, graphite and colored pencil. She has illustrated a couple of children’s books, a fantasy book cover and created original paintings to accompany the poetry of a self-published poet. She has sold original paintings as well as posters and magnets of her artwork.